The popular Jenkins Bakery has been recognised as the top Craft Bakery Business of the Year in Wales.

The bakery, based in Llanelli, but with branches throughout south Wales, now goes forward to the prestigious British Bakery Industry Awards (BIA) to battle it out against six other bakeries from all four corners of the UK.

“It’s a testament to the quality of work produced day-in-day-out by our team of quality craft bakers and the staff who work in our many shops across south Wales.”

“We are very proud of our staff here at the Jenkins Bakery – many of whom have been with us for more than 10 years.

“The Bakery Industry Awards are recognised as the Oscars of the business in the UK and we are very proud to have secured the regional Wales award.

“We now come to the even more exciting part of moving forward to compete against other bakeries from England, Scotland and Northern Ireland.”

The awards evening is recognised as an event to acknowledge the skills, creativity and business acumen of the thriving UK baking sector.

The awards evening will be hosted by former Pussycat Doll Ashley Roberts in the glamorous surroundings of The Royal Lancaster Hotel, London, on Wednesday, September 4.

David Jenkins, the firm’s company secretary and commercial director, said: “This is yet another milestone achievement for us as we head towards our 100th anniversary year.

“The Jenkins brand is firmly established in west Wales and beyond and we are looking forward to celebrating our centenary in two years’ time.

“We always strive to produce quality products for our customers and we are grateful for their continued support. We are a real family business and we have a wonderful relationship with our customers, suppliers and supporters.”

Previous awards collected by the Jenkins Bakery include ‘The Most Loved Bakery in Wales’.

And, in 2013, the business won a South Wales Evening Post / Swansea Bay Business Life magazine Business of the Month award and the Llanelli Star Ambassador of the Year award.

The Jenkins Bakery employs more than 300 people, full and part-time, across 30 different stores in South Wales.

The company has the Investors in People award.

The business employs 70 people at its Trostre HQ, while the Jenkins shop network stretches from Carmarthen to Bridgend.

There are a total of 14 shops in Carmarthenshire and even one as far afield as Powys.

The Jenkins family business was established by Mr David and Mrs Elizabeth (Lizzie) Jenkins in New Dock Road Llanelli in 1921.

Lizzie was a grand cook and “The Unique Café” (as it was known) quickly gained a reputation for producing freshly baked quality products.

The business witnessed some very difficult times over the years, including the Great Depression, World War Two, rationing and the recessions of the post-war years.

But the business has always taken pride in maintaining the standards of producing freshly baked goods.

High standards were the foundations on which the business was laid.

This meant there was a loyal customer base for the Jenkins shops in Llanelli.

The company slogan at this time was “Every bite – pure delight”.

The third generation of the Jenkins family, David and Russell, are now carrying on the family traditions.

massive thank you for my little girls frozen birthday cake, was truly amazing and to see the smile on her face was amazing, thank you so much

Big Thank You to the Morriston branch. Staff are always so pleasant and helpful. Picked up my mums 80th Birthday cake yesterday and it was lovely. Not did it only look good but tasted great too. 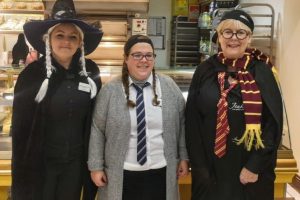 It was a Wizard Day in Llanelli town centre yesterday. And staff at the Jenkins Bakery’s shops in the town centre joined in the fun – as you can see from the photos! Jenkins Bakery regional manager Fiona Snook said: 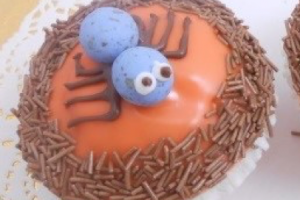 The always popular South Wales-based Jenkins Bakery has launched a special range of products to mark Halloween. “We always like to do something special to mark different occasions throughout the year and 2019 is no different,” said Russell Jenkins, operations 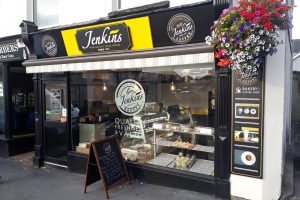 Well loved and well visited, Jenkins Bakery stores are a favourite with locals. The yellow banner is a recognisable landmark within many communities in South West Wales and is currently undergoing a make over. The iconic yellow will still be